Brawl In The Burgh 6

by Mike Harris in Blog

With an MMA double-header Saturday upon us, the earlier of the two events, Brawl In The Burgh 6, is STACKED from top to bottom. And, every single fighter plans to make a statement by bringing a “fan-friendly” style to the cage. This will be a card Pittsburgh never forgets!

The only thing I can guarantee you. An Ethan Goss fight brings you’re a** off the seat. It’s going to be fireworks!– Ethan Goss

Speaking to the two fighters involved in the main event of Brawl In The Burgh 6, Ethan Goss and Matt Gaffney, both competitors feel they have put in the work to steal the show on May 22nd. Although, Goss is training out of Gorilla House Gym in Altoona and fighting out of Petersburg, PA, he is coming into the headlining bout as the clear hometown favorite. Having competed on three prior 247 cards he’s became a familiar face to the local MMA fans. We all know every time Goss steps in the cage it’s a must-see fight.

However in the other corner, 247FC newcomer Matt Gaffney understands the magnitude of this main event and has given tons of praise to 247 for the opportunity. Traveling into hostile territory from Wisconsin, Gaffney feels his preparation at Stronghold Jiu Jitsu & Damage Inc Fight Club has him ready to showcase his skills for the Pittsburgh fans. 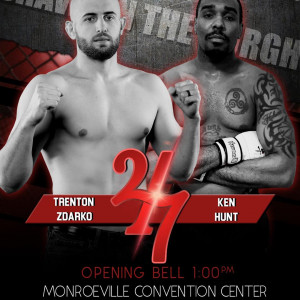 Trenton Zdarko is one of many Mat Factory Wrestling Club fighters featured on Saturday’s cards. He had an impactful amateur career picking up five wins and just two losses, one of which came too undefeated Bellator prospect Dalton Rosta. In addition to the success he found at the amateur level, Zdarko opened his professional career with a first-round submission in 2019. Since, he has only fought one other time, where he dropped a submission loss at Brawl In The Burgh 2. Looking to get back on track, Zdarko feels the Mat Factory has him prepared to take home the win by any means necessary.

Ken Hunt is fighting out of Detroit, Michigan and trains at Stars & Strikes MMA. He is making his debut with 247. Hunt has experienced both wins and losses as a pro, but his plans are . For Hunt, he believes the win will be captured by applying that experience in his fight on May 22nd. 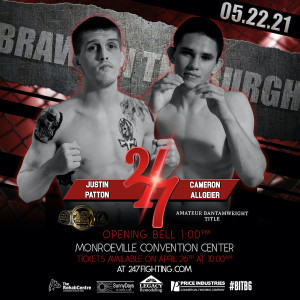 Training out of The Academy of Pittsburgh, under UFC fighter Khama Worthy Justin Patton’s confidence is at an all-time high. After an inconsistent start to his amateur career (starting off 2-3), Patton has really came into his own as of late. He enters this contest riding a three-fight win streak and back-to-back finishes. For Patton though, this is all about putting the finishing touches on his amateur career. Becoming a champion is the last thing he has to do before moving to the next level.

It’s going to be a dynamic fight. I promise that– Cameron Allgeier

Cameron Allgeier trains out of Gorilla House Gym in Altoona, PA. Cam has started his career on fire, picking up four consecutive wins. With his latest being on UFC Fight Pass for the CFFC. The young PA prospect is humble but confident heading into his first title fight. When asked about his own transition to a professional career, Allgeier was clear that there’s no rush. Lastly, He wants fans to know his game is always evolving and he will bring all aspects of MMA to Brawl In The Burgh 6. 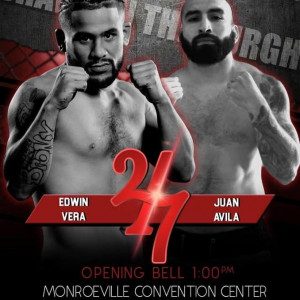 I’m ready. By any means, I’m coming with that FIRE– Edwin Vera

Training out of the Mat Factory Wrestling Club in Altoona, PA. Edwin Vera is entering the fight undefeated and plans on leaving that way too. Also, Vera is a three-fight veteran of the 247 cage. Comfortable in his home turf, he’s ready to make a statement for all the fans. Vera is confident in his team and believes this is the best camp of his career so far.

Juan Avila is making the trip to Pittsburgh for Brawl In The Burgh 6 all the way from Lake County, IL. Training at Wrecking Ball MMA, Avila is poised and ready to take the zero off of Vera’s record. Although, Avila has a record with three wins and three losses, he should not be taken lightly. He is currently the #7 ranked amateur featherweight in the state of Illinois. Furthermore, he’s coming into this bout with double the number of fights as his opponent Vera. 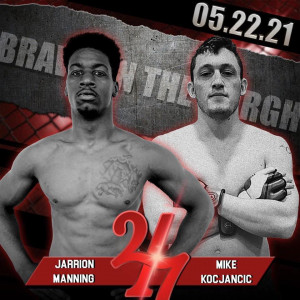 Jarrion “Boi Bandido” Manning trains out of Indio Dojo in Pittsburgh, PA. Manning is making his debut for 247FC at Brawl In The Burgh 6. But he isn’t a stranger to competing. He picked up a win at the Rio de Janeiro Regional event in January 2020. Manning is hoping to make it a short night for his counterpart on Saturday. 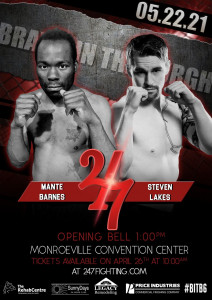 I honestly plan on destroying this kid. Don’t mean to sound cocky at all. But I want to make him quit in the first round. He’s not on my level– Mante’ Barnes

Mante’ Barnes is eager to make his MMA debut. He has been sharpening his skills in Altoona, PA at the Gorilla House Gym. Barnes comes from a wrestling foundation and is looking to make his opponent quit by imposing his grinder mentality. Although, he is very confident in his preparation for his debut. Barnes wanted to be clear that it’s simply about levels and there’s no disrespect.

Steven Lakes is fighting out of Lockport, NY. The gym he calls home is Enoch Fighting Faith. Lakes is making his return to the 247 cage. The first time the New York native introduced himself to Pittsburgh MMA was in his debut last November. Where he got the best of Kailan Foster and brought a big win back to home to The Empire State. 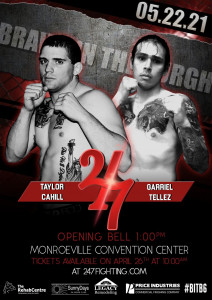 The opportunity to pursue a mixed martial arts career has been the focal point of every decision I have made in my life. I am unbelievably focused-Taylor Cahill

Taylor Cahill is fighting out of Somerset County, PA and trains at Indio Dojo & The Shop. Cahill is dedicated to making a career out of fighting in MMA. Although, it’s on the wrestling mat where he found his competitive nature. Cahill is a former NCAA wrestler for Buffalo, Bloomsburg, and Clarion Universities. He is excited and prepared for his debut. But something he is looking forward to even more is supporting his older brother, Tanner Cahill, in his fight at the next 247FC card.

Gabriel Tellez is making the trip from Illinois alongside the other Wrecking Ball MMA representative on Brawl In The Burgh 6 Juan Avila. Although, unlike Avila, who has six fights under his belt already, Tellez is making his MMA debut on Saturday. He is an unknown name heading into his first fight like most debut fighters. But with the experienced talent he has around him at Wrecking Ball MMA he believes he’ll be leaving the steel city with some well earned attention. 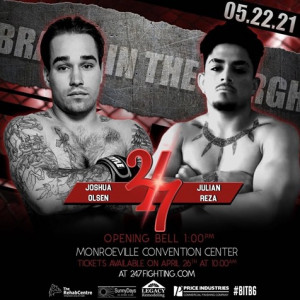 I can’t wait to put on a show for the fans. Just sit back, relax, and enjoy– Julian Reza

Julian “Juju” Reza is fighting out of Danbury, CT and is one of the six fighters making their MMA debut at Brawl In The Burgh 6. Reza trains under highly respected UFC LHW title challenger Glover Teixeira at Teixeira MMA & Fitness. The amateur prospect knows he’s coming into hostile territory fighting against a Pennsylvania native. But this is the type of situation Reza thrives in. His plan is to come into PA as the enemy, but to leave a fan-favorite that we’ll never forget.

The first 247FC card of 2021 will be one you DON’T want to miss! The fights start at 1:00 pm @ the Monroeville Convention Center. Buy your tickets HERE