Like Greek food? Kouzina Bistro saved you a seat.

Tucked away inside the George Washington Hotel in Washington, PA, Kouzina Bistro features a stripped-down menu that is just perfect for the adventurous yinzer.

Bill Hutchinson, local boxing star and entrepreneur, told us the menu –– Gyros, loaded chips, a Greek burger, soups, and more –– is intentionally simple every step of the way.

“You can’t just open up a Greek place here and go full-on, guns-blazing into the deep end,” Hutch said. “I wanted a menu that combined some common ‘Pittsburgh’ ideas while slowly introducing that Greek flair.”

While first-timers to Greek cuisine might feel a little intimidated trying something new, Kouzina balances things we know and love (like the burger) with Greek elements (tzatziki sauce and Greek seasonings on the beef).

For the latest edition of our Pittsburgh Combat Sports Podcast Hidden Gems series, Ryan and I snagged the loaded chips and a couple of traditional gyros. 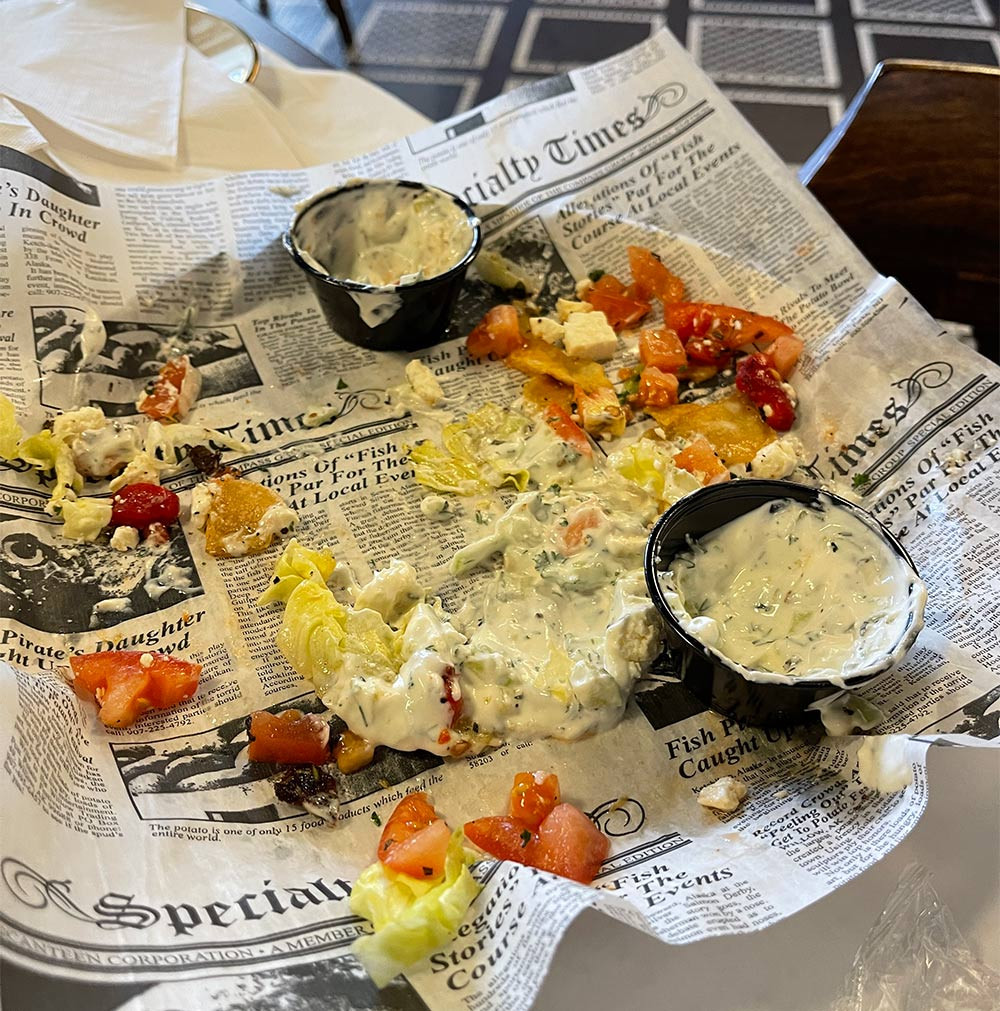 By the time I remembered, “Oh, I should take a picture of these,” the plate looked like that. Sorry about it.

But yeah, they were awesome. Fresh-cut potato chips loaded up with gyro meat, lettuce, tomato, feta, and tzatziki?

What’s not to love there?

The gyros kept the good vibes rolling –– and I did remember to take a picture this time: 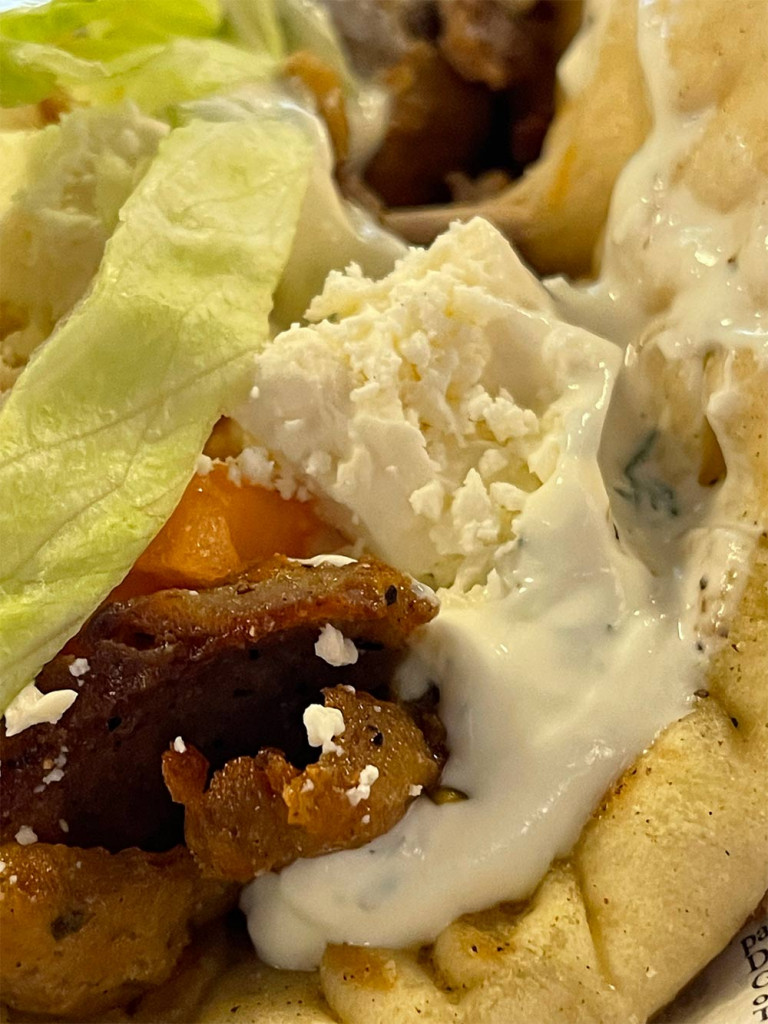 Gyro meat, tzatziki, lettuce, tomato, and giant blocks of feta wrapped up in a deliciously seasoned and griddled pita.

Seriously, that pita was bonkers. On the first bite, Ryan and I both said, “Holy s*$!, that pita” in unison.

Just as Hutch put it, this gyro represents the perfect introduction for somebody looking to dabble. It features plenty of Greek influence without going too over the top and confusing a meat-and-potatoes palate.

As a pretty standard offering, you get chips on the side. They’re much better than your standard “bag of Lays,” too. 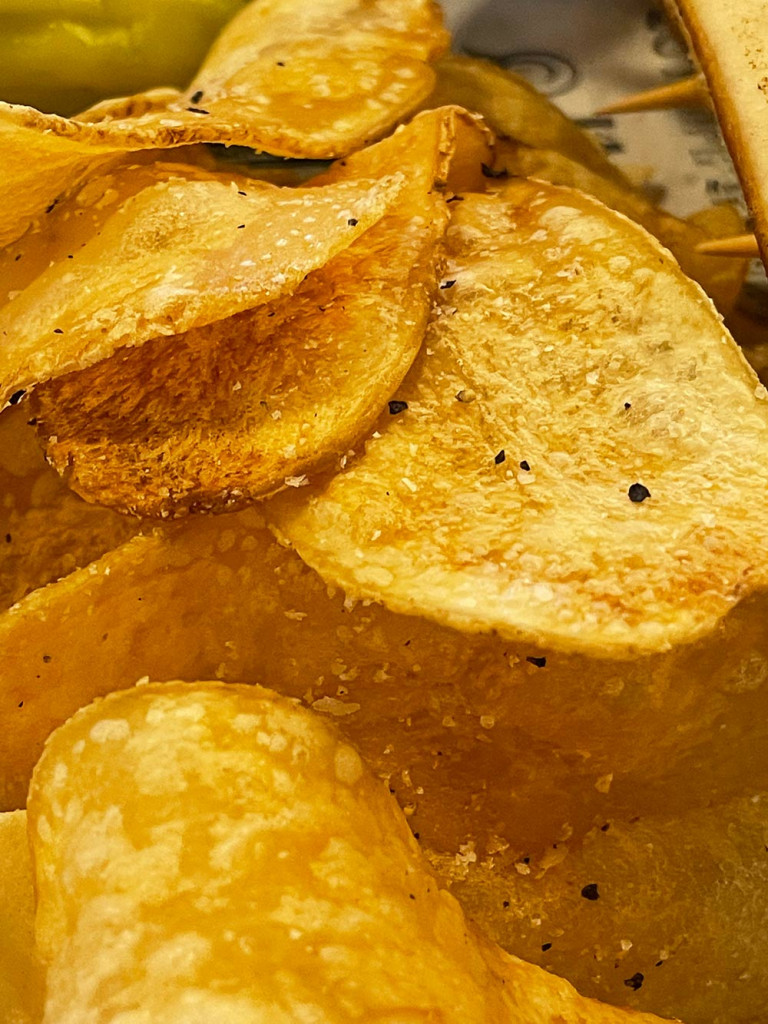 Freshly fried, freshly seasoned. Delicious. Even after starting with the loaded chips, I still finished these on the side as well. They’re addicting –– like all good chips.

You could also snag a fried fish gyro for Lent or some baklava for dessert if you so choose (Ryan fully kicked his keto diet for the day and chowed on some baklava after the gyro).

All in all, Kouzina Bistro nails what they’re looking to do. The service was extremely friendly, and the menu offers up enough variety without alienating anyone in the process.

For a quick lunch in the Washington area, tuck into the George Washington hotel’s Kouzina Bistro and snag a gyro (Oh, and let me know how right I am about that dang pita).

Your taste buds will thank you.

PS: We recorded an episode LIVE with Justin Patton from Kouzina Bistro! Enjoy: