Brawl in the Burgh 8: How Jake Lowry Prevented a Black-and-Gold Meltdown in Monroeville

Well, this isn’t how Pittsburgh drew it up.

He punched undefeated Mat Factory Wrestling Club standout Jacob Lowry in the face – hard – then he mounted him.

Then he took his back.

… then he flattened him out.

The crowd fell silent. The energy inside the Monroeville Convention Center evaporated. The cheers turned to panic and uhh, holy crap, I just hope this crowd doesn’t riot.

On the heels of back-to-back losses for the home team to kick off the pro card, this was not how things were supposed to go down.

Through six amateur bouts as well as his pro debut back at Brawl in the Burgh 7, Lowry was practically untouchable. A dominant grappler with a killer instinct, Lowry marks one of the hottest prospects in the region, and for good reason.

And now Hutch was having his way with him in front of the near-sellout hometown crowd.

“I knew I needed to get away, but at the same time I knew it was better to get through that round and kind of pick it up the second round, recover a little bit, get myself back together and keep going,” Lowry said backstage after the fight.

That’s one way to put it.

Another way – and sorry, Jake, but I like this better – came from a fan just a few feet behind me:

After fending off multiple submission attempts and clearing the cobwebs from that early Hutch right, Lowry did just that.

Little by little, he took control of the bout, and by the midway point of the second round, it was pretty clear where this was headed. In fact, it was right about the time this elbow landed that the crowd realized their boy was back – and in total control (volume up if you wanna puke):

From there, Lowry continued to do Lowry stuff, grinding Hutch into the mat and eventually finding the finish via third-round submission.

A gutsy win like that had to feel good, right?

“He wants to win everywhere. He wants to dominate every second,” Lowry’s coach and Mat Factory owner Isaac Greeley said after the fight. “He’s actually not happy right now, but I don’t think he realizes just how gutsy that win was yet. That was real-deal, UFC-level stuff that he just showed.”

Any silver lining in that, Mr. Lowry?

More Brawl in the Burgh 8 notes

• Lowry saved the day a bit for the Pittsburgh crowd with his comeback submission win, but it was still a rough go for the Steel City boys Saturday evening.

The Academy’s Justin Patton and Jake Schilling both lost via quick submission to kick off the pro card, and “The Prince of Pittsburgh” Cole Macek got wiped out by DeWitt Dixon with just seconds left in Round 1. That’s the sport and that’s the game though.

One thing’s for sure: Pittsburgh doesn’t turn its back on its own. After the losses, I heard plenty of encouragement from the crowd, which is always awesome to take in.

• While Schilling was noticeably upset after his defeat, you gotta tip your hat to his opponent, Shawn Tarlton. Making his professional MMA debut, the Michigan-based fighter locked up a gogoplata just moments into the fight and worked to cinch it tighter and tighter before eventually securing the tap.

Hilariously, Tarlton talked me through the finish backstage:

• Not to beat a dead horse here, but ya just gotta give credit where it’s due. Patton’s opponent, Shawn Suser, hit a gorgeous armbar early in their bout, and Dixon was just a wrecking machine against Macek.

“That dude is strong,” Macek was saying of Dixon on his way out of the cage.

It’s never a cakewalk inside the cage, and Brawl in the Burgh 8 proved that point repeatedly Saturday night.

• Shoutout to the best post-fight speech of the night from Dixon, too. The dude is hilarious, and he cut a post-fight promo that had me genuinely cracking up.

Asked what was next for him in his career, Dixon fired back with a classic.

“Man, I just … Anybody know where they sell crab legs? I just want some crab legs. That’s what’s next.”

• There’s no Fight of the Night award, but if there was, you’d have a tough time convincing me not to give it to Gabriela Valdes and Syd Ross for their amateur women’s bantamweight title fight.

After spending the majority of Round 1 off her back absorbing punishment from Ross, Valdes found her groove in Round 2 and carried that momentum into Round 3, largely piecing up her opponent on the feet. She showcased some crisp striking and a pace that will undoubtedly make her a can’t-miss attraction for many fights to come.

Valdes took home the 247 FC gold for her efforts, but Ross showcased her grit and aggression that makes her a fan favorite every time out.

• It wasn’t all bad for the local fighters Saturday night, of course. The Mat Factory’s Ferdaws Nayimi opened the show with a dominant performance against Clinton Ewing, then Indio Dojo’s Taylor Cahill kept the momentum rolling with a third-round arm-triangle choke against Brandin Harrington.

The Academy’s Chase Boyde took the baton from there and sprinted away with it, submitting Brogan Endres via rear-naked choke in Round 2. It was an emotional win for Boyde and a step back in the right direction after dropping his previous two contests.

• Big win for sportsmanship at Brawl in the Burgh 8. 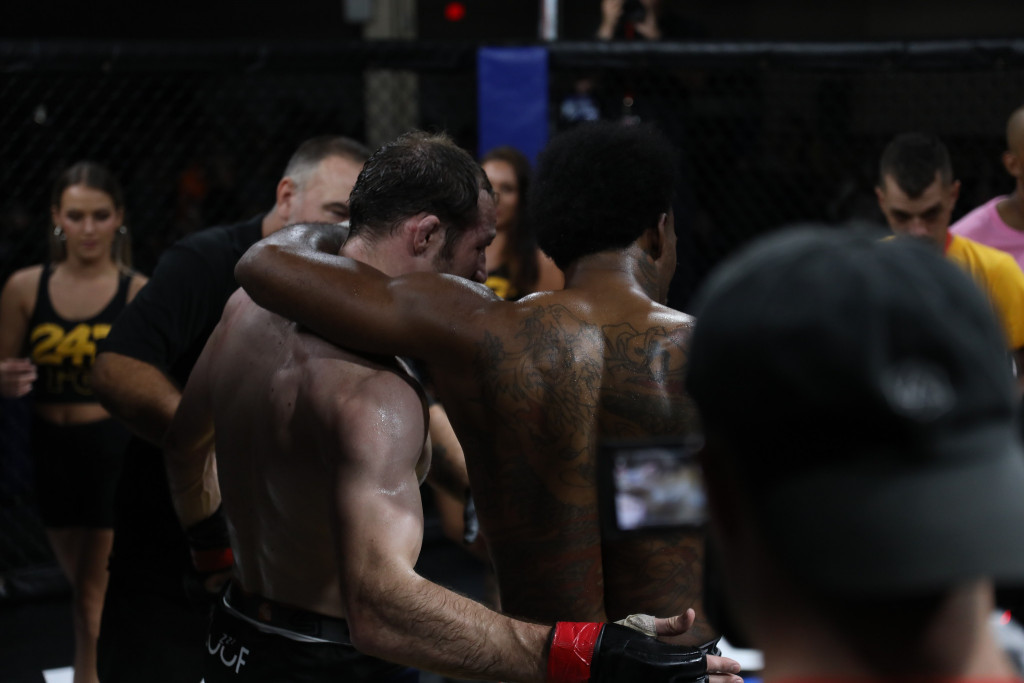 Macek and Dixon talked plenty of trash leading into their bout, and even though things didn’t go his way, Macek made a point to properly congratulate Dixon, hashing out any bad blood that may have existed.

Ditto for every bout on the card. Time after time, a common theme emerged: Respect.

You love to see it.

• How good is Cam Allgeier?

No, that’s not a rhetorical question. Just how good is this kid? I’m not sure we know the answer just yet. The young, undefeated bantamweight climbed to a perfect 6-0 in his amateur career with a first-round triangle choke of Asher Frederick Saturday evening, silencing some doubters who questioned his ability to finish fights after three straight decision wins.

It’s only up from here for him, and count me among those excited to see what’s next.

Get those tickets NOW.

This site uses Akismet to reduce spam. Learn how your comment data is processed.