Brawl in the Burgh 10 ruled.

Feb. 5’s fight card marked perhaps 247 Fighting Championships’ most hyped and hotly anticipated event to date –– and it delivered on every promise and then some.

From Khama Worthy’s hometown return to the high-profile bantamweight title fight between Hunter Starner and Cam Allgeier to Gavin Teasdale’s MMA debut and everything in between, this event brought the packed Monroeville Convention Center to its feet early and often.

— WATCH THE FULL BRAWL IN THE BURGH 10 REPLAY HERE —

Julian Flenory started the show with an absolute bang, knocking out Matt Vanderhoff in just 16 seconds to set the tone.

Things took an unfortunate turn one bout later, as Craig Perry injured his arm while posting during a takedown from Anthoney Morris.

If you’re squeamish, I recommend looking away…

Normally, I’d hesitate to share the image (captured beautifully by P-L Photos, I might add), but Craig handled the situation remarkably well and was actually excited to see it.

He was in high spirits just moments after visiting the hospital, and he apologized to us repeatedly.

There’s obviously no reason for him to be sorry or anything of the sort, but Craig showed his character and mental makeup in the wake of the injury. He’ll be back –– no doubt about it.

From there, the show rolled on, with Evan DeLong and Kenyon Moore putting on a Fight of the Night contender just before Gavin made his MMA debut against the game and dangerous Tyler Fry.

Gavin learned that MMA isn’t wrestling immediately, eating a hard kick from Fry just seconds into the fight. That strike definitely caught his attention, but Gavin did what Gavin does: He powered forward, snatched a leg, dumped Fry on his back, and dictated the fight.

Fry threw up a gauntlet of submission attempts for three rounds, but the story of this one was all about wrestling and control.

Edwin Vera and Awstin Martinez ran with the torch from there, putting on a fast-paced, action-packed three-round advanced amateur tilt to set the stage for the night’s title fight.

Cam Allgeier and Hunter Starner entered their showdown at 6-0 apiece –– the classic “Somebody’s 0 has got to go” scenario.

In the end, Starner controlled the fight by repeatedly putting Cam on his back and winning wrestling exchanges, but this was a beautiful example of the talent level out there at the advanced amateur level.

Cam showed off his slick submission game and some greatly improved standup throughout the fight, but as was the case for Teasdale vs. Fry, good old-fashioned wrestling was king in this one.

The pro fighters took the stage next, capping off a glorious night of fights at Brawl in the Burgh 10.

Both Justin Patton and Josh Armstrong needed a win –– and they wasted no time getting after it.

Armstrong landed a hard side kick to start the fight, but Patton utilized that opportunity to dump his foe to the canvas. While Armstrong looked for the guillotine during that transition, Patton once again countered, and the fight was a wrap.

You don’t see it often in MMA, but the Von Flue choke is devastating when it’s there. Patton sensed the opportunity and pressured Armstrong’s neck in textbook fashion, putting him to sleep.

Fresh off a five-fight UFC run, Khama returned to the 247 FC cage to face the dangerous Jeremiah Scott in the Brawl in the Burgh 10 main event.

The Monroeville Convention Center was downright electric for this one, and Khama clearly fed off that energy. From the opening bell, Khama showcased his devastating striking game, landing kicks, knees, and punches to keep Scott off-balance and on the defensive.

While Scott repeatedly threw some serious return fire, it was Khama who turned out the lights in Round 1. A hard knee to the body crumpled Scott, and Khama pounced, following up with an array of attacks that forced Chip Snider to step in and stop the fight. 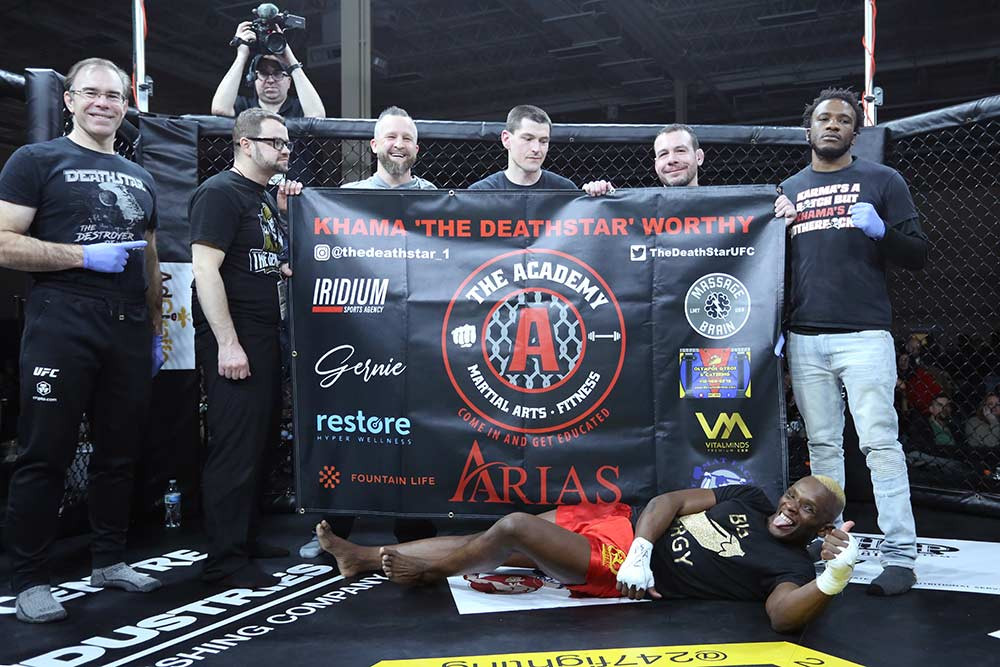 He’s back (And that “Say Cheese” moment was captured by the man behind the lens, Chris Bermudo).

Here are the full Brawl in the Burgh 10 Results:

— WATCH THE FULL BRAWL IN THE BURGH 10 REPLAY HERE —